Farmers Should Test Their Corn

Find this article at:
go.ncsu.edu/readext?369707
— Written By Peter Austin 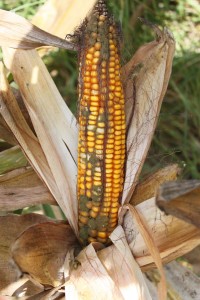 The state agriculture department is advising corn growers to have their corn tested for aflatoxin, a byproduct of mold that can be harmful to humans and livestock.

Please see attached press release from the NCDA for details.

Farmers should have corn tested for aflatoxin

Toxic metabolic by-products of fungi known as mycotoxins have received considerable attention during the past several years. The mycotoxin found in corn harvested in North Carolina that has received the most attention is aflatoxin, produced by the fungus Aspergillus flavus. Aflatoxins can occur in several chemical forms. In corn the most common aflatoxins are aflatoxin B1 and aflatoxin B2. Aflatoxins are known to cause serious health problems in animals including reduced weight gain, capillary fragility, reduced fertility, suppressed disease resistance, and even death. No animal is known to be resistant, but in general, older animals are more tolerant than younger animals. Aflatoxins have been implicated in deaths from acute toxicoses in young animals, particularly poultry, as well as several animal health problems, including reduced fertility and growth rate. Aspergillus flavus is widely distributed in nature and is favored by high temperature. Temperatures ranging from 80 to 100 degrees F and a relative humidity of 85 percent (18 percent moisture in the grain) are optimum for A. flavus growth and aflatoxin production. Growth of the fungus does not occur below 12 to 13 percent moisture in the grain.

Aflatoxin contamination is higher in corn that has been produced under stress conditions. Thus, drought, heat, insect, and fertilizer stress are all conducive to high levels of aflatoxins. Therefore, in order to minimize the level of aflatoxins, the following practices should be followed: