Find this article at:
go.ncsu.edu/readext?655461
— Written By Allyson Farmer 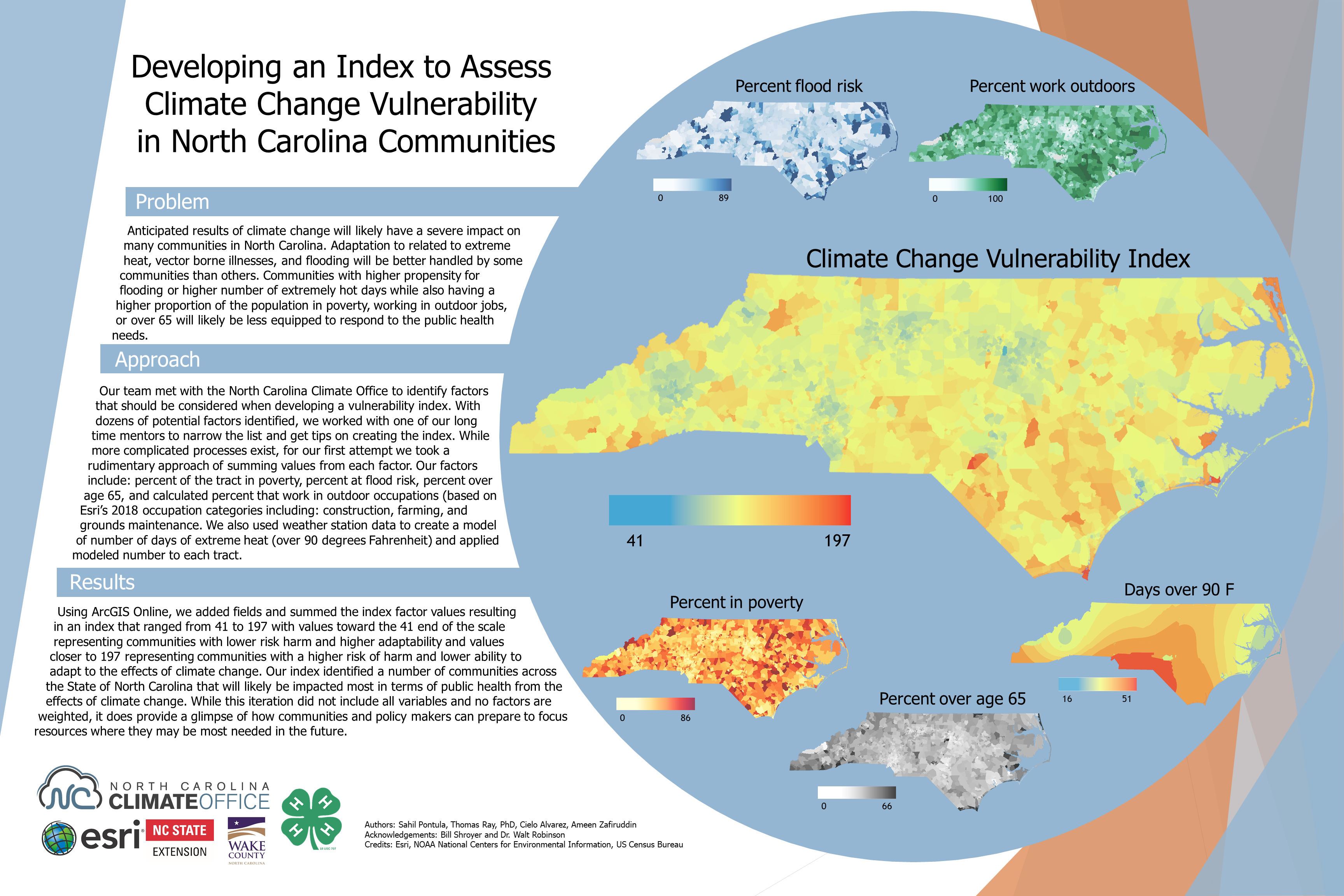 Climate change is among the most pressing problems facing humanity. As Barack Obama puts it, “There’s one issue that will define the contours of this century more dramatically than any other, and that is the urgent threat of a changing climate.” We cannot ignore the effects of our changing climate. The rising sea levels. The air and chemical pollution. The deforestation. Climate change is a problem whose solution will require universal collaboration, and the first step towards a unified effort against climate change is awareness. In this GIS project, we took the first step of mapping vulnerability to climate change of communities in our state of North Carolina. In this way, the threat climate change poses to communities can be easily seen, and we hope more individuals will be empowered to take action.

But of course, climate change is a multifaceted problem, and we strove to include in our map the factors contributing to a vulnerability that we deemed most relevant. For ease of presentation, five factors were chosen, namely poverty (measured by the percent of the community’s population that was impoverished), the elderly population (measured by the percent of the community’s population over the age of 65), the number of days over 90 degrees Fahrenheit, the percent of employment that was outdoors, and the percent risk of flooding. These factors were chosen after deliberation amongst our team as well as after discussion with Dr. Walt Robinson of the North Carolina Climate Office when we visited the Office in February 2019. Our visit included an overview of data and research related to climate as well as a look at similar efforts to ours. We stayed for a couple of hours and discussed potential variables and left with quite a list. For a preliminary approach, we also considered unifying the five aforementioned factors to create a climate change vulnerability index. The goal of this index was to demonstrate the risk of various communities to the detrimental effects of climate change. For a first attempt, we weighed all factors equally and mapped the resulting data. The map of this vulnerability index could be compared to those that depicted the five aforementioned factors.

The first factor, percent poverty, indicated how much of a population suffered from a lack of resources needed to buffer themselves against the impacts of climate change. Higher poverty percentages implied a dearth of financial resources needed, for example, to construct appropriate infrastructure that could at least alleviate some of the symptoms of climate change, to afford insurance coverage and rising utility costs, or to manage the costs associated with displacement. While poverty puts selected individuals in a population at greater risk than others, age is another crucial factor that determines an individual’s or a population’s ability to handle climate change’s effects. The second factor, percent of the population over age 65, accounted for the effect of old age. The elderly, like the impoverished, are less equipped to survive the public health threats posed by climate change, as their bodies are more susceptible to developing illnesses (especially vector-borne illnesses as well as heat-related illnesses). Yet another relevant aspect of a population vulnerable to climate change was the percent of employment that occurred outdoors. With the increasingly severe weather, intense heat, and the presence of vector-borne illnesses and air pollutants, outdoor workers are at increased risk of facing the brunt of climate change’s detrimental impacts. The classification of outdoor work was based on Esri’s 2018 occupation categories, which included construction, farming, and grounds maintenance. The last two factors, not directly related to the population itself but just as important, were the number of days over 90 degrees Fahrenheit and the percent flood risk. The former directly indicated the vulnerability of communities to severe heat (and thus also its consequences such as heat strokes). The latter, percent flood risk, gave a crucial metric of vulnerability to climate change because it could directly relate to other factors such as risk of water-borne illnesses and lack of appropriate infrastructure to handle flooding (which in turn related to the poverty metric).

So what was seen in the maps? The climate change vulnerability index was constructed by summing the values of the five aforementioned variables (four values were percents and one was numerical, namely days over 90 degrees Fahrenheit). The resulting index ranged from 41 to 197. Despite this simple approach that weighed all factors equally, the resulting map provided interesting results that were compared to maps of the individual factors. As expected, many of the most vulnerable communities to climate change (as measured by the index) were located in the coastal regions, where the percent flood risk was also high. Some vulnerable regions, however, also lay in the piedmont region, where the percent of the population in poverty, the number of days over 90 degrees Fahrenheit, and the percent of outdoor work compensated the relatively lower percent flood risk. Though not as prevalent as in the coastal region, there existed some vulnerable communities in the mountain region. On comparing to the individual maps, we suspect that this was dominated by the percent of the elderly and impoverished in the population, as well as perhaps the percent of outdoor work. Overall, we have discovered that no one factor is the sole determinant of vulnerability to climate change. It is important to realize that no community is immune to the effects of climate change, and everyone is responsible for taking the small steps towards action.

Like every research-based project, it is important to consider future directions. What would make the map more appealing? More accurate? More informative? Our current map, while informative and engaging, has several key components that may be seen as limitations to others. For example, while we believed that it was important to notice the effect of every factor that we covered, and thus weighted them equally, this could have resulted in a misrepresentation of the data. Therefore, one avenue of work that could be pursued to move this project forward, would be to develop an objective method of weighting the indices. Perhaps, after collecting more data, we would realize that poverty percentage and the percent of employment that occurred outdoors play a greater role in an individual’s vulnerability to climate change compared to the flood risk. Such a realization and the subsequent tweak of the map’s model might show us that some coastal areas were less vulnerable to climate change than we thought before, while others are more vulnerable to climate change than previously thought.

We are part of the Wake County 4-H GIS club. We are a group of young people aiming to help fix current health issues that affect our communities today. The GIS program allows us to visualize many of these problems and encourages us to think of solutions to these problems.

We also have a few other email lists you can subscribe to.